(Christian News Alerts) – resident Donald Trump was lambasted by the national media for suggesting that those NFL players who kneel for the national anthem should be fired. Well, it looks like President Trump’s tough talk scored him another victory.

On Twitter, the Denver Broncos announced that their players will no longer protest the national anthem.

The statement read, in part, “Last week, members of our team joined their brothers around the NFL in a powerful display of unity. As controversial as it appeared, we needed to show our collective strength and resolve.”

Broncos GM John Elway publicly promised to “take politics out of football” by telling his players to stand for the national anthem.

“I’m one that believes in standing for the National Anthem, and I’ve always believed that. I believe that this is the greatest country in the world. We are very fortunate to live here, but it’s obviously not perfect. There are a lot of things that need to be corrected, and we will continue to work on those things. I’m one that really believes in standing for the flag,” Elway said in a public statement. 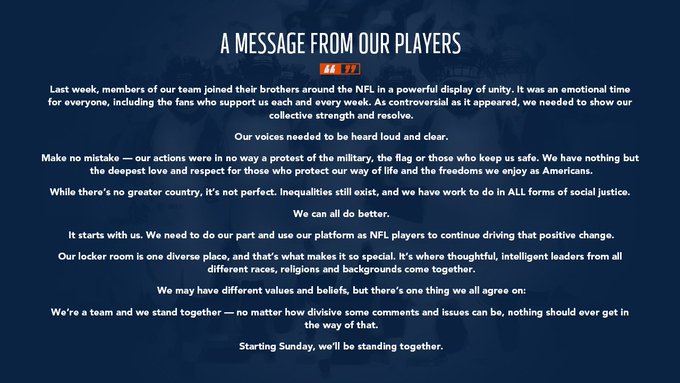 A message from our players:

“I understand the players and the way they felt from the comments that were made earlier in the week. They felt they had to go down and kneel and that’s up to them. Hopefully as we go forward we can start concentrating on football a little bit more. Take the politics out of football. But I think last week was a good show of unity by the NFL and hopefully this week we can move forward,” Elway added.

These statements come after a week of public outcry against the team and its players.

One Denver Ford dealership discontinued their cooperation with the NFL and the Denver Broncos.

Another Broncos player, Brandon Marshall, lost several sponsorships because of his actions.

Overall, putting politics into football has been a losing formula for the NFL.

The national anthem protests have not only led to a decline in NFL viewership, but TickPick claims that NFL ticket sales are down by 17.9-percent.

Such drops will undoubtably impact the NFL, its payroll, and its ability to play an important role in American culture.

Many right-wing commentators have hailed this development as the very thing that will break America’s addiction to football. One former Infowars reporter even talked about how his boycott of the NFL led him back into church.

More Americans should do likewise. There are more important things than cheering on a time of wealthy and spoiled athletes who have shown that they have no allegiance to America or Americans. Faith, family, and country. These things are vastly more important that some sporting event.

An entire nation should be grateful to President Trump for exposing the true rottenness of the NFL. Now, even if other teams mimic the Broncos, Americans should still keep their TVs turned off and their money away from the NFL.