ICE was “testing our defenses and they found some weak points,” San Francisco Sheriff Vicki Hennessy told the San Francisco Chronicle on Monday.

“My staff made a mistake and I have to hold myself accountable,” Hennessy said. “I apologize on behalf of the department. I feel embarrassed by it. I’ve taken steps to make sure it never happens again.”

Unbelievably, the Sheriff’s office actually violated California law by accommodating the ICE agents to conduct an interview with the inmate.

“Department policy broadly restricts cooperation with U.S. Immigration and Customs Enforcement, forbidding most communication with the agency and barring access to inmates, some of whom the government would like to detain for potential deportation,” the Chronicle reported.

California has become a bizarro land where carrying out federal law is condemned and breaking the law is praised due to radical Democrat policies.

For example, Oakland Mayor Libby Schaaf violated federal law when she tweeted in February a warning to criminal illegal aliens in the Bay Area that ICE would conduct raids in the next 24 hours. 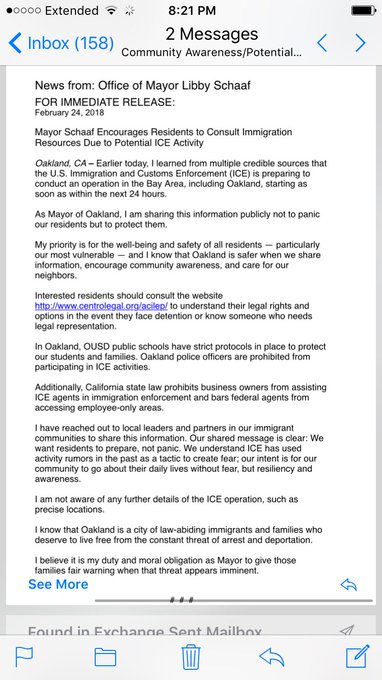 Around 800 illegals evaded capture as a result of her warning.

President Trump reacted to the news last week, calling the mayor a “disgrace” for her unlawful actions.

“What the mayor of Oakland did the other day was a disgrace,” Trump said. “They had close to 1,000 people ready to be gotten, ready to be taken off the streets … they say 85 percent of them are criminals and had criminal records. And the mayor of Oakland went out and warned them, scattered, so instead of taking in a thousand they took in a fraction of that.”

And on Tuesday, the Oakland Police Chief Anne Kirkpatrick defended the City Council’s decision not to cooperate with ICE on any level.

“I serve the community through the voice of the City Council,” she said, adding the Council’s decision not to cooperate with ICE “will be honored.”

However, the lawless decisions by the Democrats’ leadership don’t reflect the sentiment of the majority of residents.

According to a Survey USA poll, an overwhelming 62% of Bay Area residents believe local law enforcement should assist the feds with suspected violent illegal immigrants.

Trump reiterated his stance on sanctuary city policy Tuesday before he left for the liberal stronghold of Southern California to inspect the border wall prototypes.

“California’s sanctuary policies are illegal and unconstitutional and put the safety and security of our entire nation at risk,” he tweeted.

California’s sanctuary policies are illegal and unconstitutional and put the safety and security of our entire nation at risk. Thousands of dangerous & violent criminal aliens are released as a result of sanctuary policies, set free to prey on innocent Americans. THIS MUST STOP!

“Thousands of dangerous & violent criminal aliens are released as a result of sanctuary policies, set free to prey on innocent Americans. THIS MUST STOP!”