London (CNN Business)This is how you demolish a nuclear power plant German-style. No big red button. No dramatic countdown. No “kaboom!”

The engineers who brought down a disused power plant on the River Rhine last week did so without an explosion. Instead they used robots to gently collapse it like a house of cards.
Or at least, as gently as you can flatten an 80-meter (262-foot) concrete cooling tower.
The tower was part of the Mülheim-Kärlich power plant, which was in operation for just over a year in the 1980s. The plant was shut down in 1988 following licensing issues and concerns about the risk of earthquakes in the area. The hefty task of dismantling began in 2004.
Content by BP
Bold and Ingenious Solutions: How is India Tackling the Dual Energy Challenge?
Across India, as millions lift out of poverty, the challenge is provide more energy with fewer emissions. 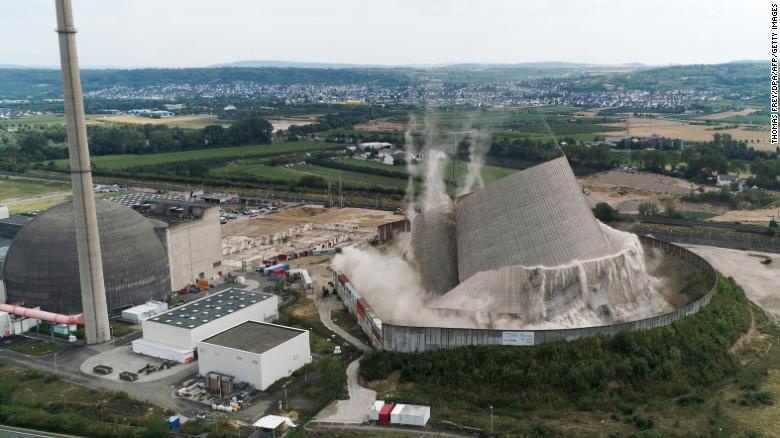 The spectacular moment the cooling tower came crashing down.
Germany decided to phase out all its nuclear power plants in the wake of the Fukushima disaster in 2011. And it’s also planning to close all its coal power plants by 2038 in an effort to cut its greenhouse gas emissions, which are currently the largest in Europe. That means there are likely to be many more such demolitions in the coming years.
Decades ago, Germany’s power plants were a symbol of its engineering prowess. Today the country has become a world leader in taking these complex buildings apart.

In May last year, engineers began shortening what was then the 162-meter-tall cooling tower at Mülheim-Kärlich. They attached a robot to the lip, and for the past year it’s been munching its way down the building -— a bit like a caterpillar devouring a leaf.
By June this year, the tower was half its previous height. 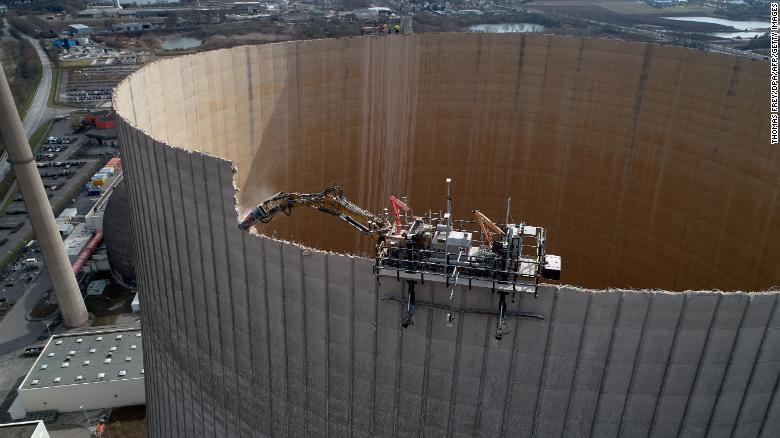 The robot eating its way around the cooling tower.
Engineers still needed to finish the job. But as project manager Olaf Day explained, they didn’t have permission from authorities for an explosion, so instead came up with a different plan.
The tower was supported by 36 V-shaped pillars.Last week, the team of experts used a giant robotic “hammer” to weaken some of the pillars, and then another high-tech pair of “scissors” to cut them until the tower collapsed, said Day.
“It was the first time in the world this demolition method has been used [on a nuclear plant],” he said, adding that the entire “hammer and scissors” process took just under four hours. 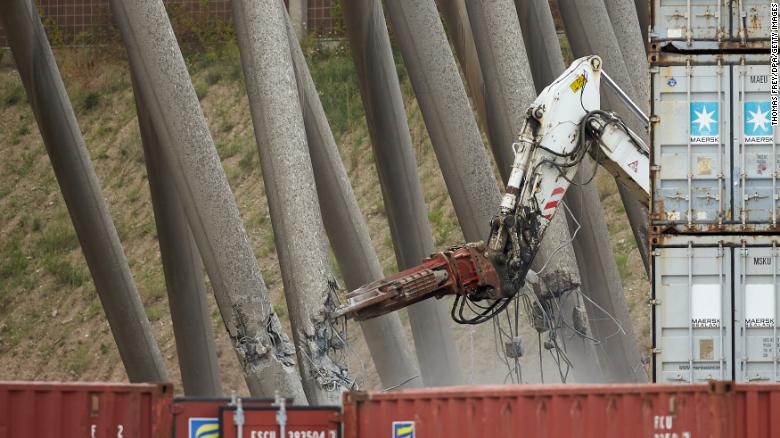 A robot weakens one of the supporting pillars of the cooling tower.
There was another benefit to this unique method.
Explosives cause”huge amounts of dust that fly everywhere,” explained Professor Miranda Schreurs, chair of environmental and climate policy at the Technical University of Munich. The Mülheim-Kärlich tower, however, just “fell in on itself,” producing minimal dust.
While the tower was not deemed radioactive, there’s still an interest in “minimizing potential spread of any harmful materials,” she said.

For more than three decades, the cooling tower dominated the skyline in this small town in western Germany, the legacy of an era when the country generated around 30% of its electricity from nuclear power, according to Schreurs.
Back in the 1970s and early 1980s, nuclear energy was seen as a “sign of Germany’s engineering prowess,” Schreurs said.
But when the 1986 Chernobyl disaster in nearby Ukraine caused radioactive clouds to drift over western Europe, concerns about the safety of nuclear energy “took on a whole new dimension,” she said.
Following the reunification of Germany in 1990, more Soviet nuclear plants in the former East Germany were decommissioned that “did not meet the West German safety standards,” said Schreurs.

Germany has been cooling on nuclear power since 2000, but it was Japan’s Fukushima disaster in 2011 that really swung the government into action.
Chancellor Angela Merkel quickly set new deadlines. Of the country’s 17 reactors, eight were immediately shut down. The seven reactors still in operation today are due to close by 2022.
As the plants closed down, a new industry has emerged.
Even after a power plant shuts, “you still need people who are experts in radioactive materials, you still need people who know how to deal with the robots that operate inside nuclear facilities,” said Schreurs.
That know-how could be exported to other countries. There are about 450 nuclear power plants in the world, many of them approaching the end of their lifetimes.
“So you’re not going to have the same level of expertise as you have here in Germany,” said Schreurs. “That means Germany will probably play quite an important role in helping other countries to also deal with decommissioning.”

Today Germany gets about 12% of its electricity from its seven nuclear reactors, and over 40% from coal, according to the World Nuclear Association.
The big question is whether renewables will reliably be able to fill the gap, particularly in a country with a large energy-intensive manufacturing sector making cars, steel and chemicals.
Germany currently produces more electricity than it needs and exports the surplus to neighboring countries. But one difficulty is that the supply of renewable energy is variable. 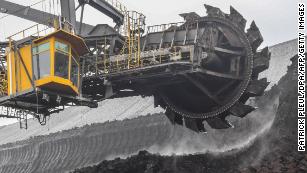 Germany hands over last black coal, but struggles to curb its emissions
“The biggest issue in terms of security of supply is when the wind doesn’t blow and the sun doesn’t shine,” said Hanns Koenig, of energy market analysis firm Aurora Energy Research.
That could be resolved by efforts to create a much more integrated European power market, he added.
The end of the nuclear era will mark Germany in a different way too.
After the cooling tower came down, Day described the surreal feeling of driving past the site with “no landmark for orientation.”
“It was astonishing,” he said. “And it must be even more astonishing for the people who have lived here for 30 years.”
cnn.com/2019/08/16/business/mulheim-karlich-nuclear-power-plant-demolition-grm-intl/index.html