MOSCOW (AP) — Two Russian doctors have died and one remains in the intensive care unit in serious condition after falling out of windows in hospitals under mysterious circumstances.

The tragic incidents last week made national headlines, with media reports saying all three have come under pressure from their superiors over working conditions amid the coronavirus pandemic.

In recent weeks, medical workers all over Russia have decried shortages of protective equipment and questionable infection control procedures that turned dozens of hospitals into virus hotbeds, with hundreds of doctors and nurses contracting the virus. Many said they have been threatened with dismissal or even prosecution for going public with their grievances. 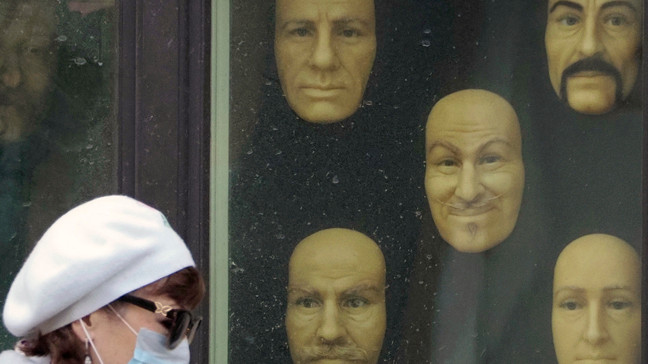 A woman wearing a face mask to protect against coronavirus walks past wax faces displayed in a window of a wax museum in St.Petersburg, Russia, Monday, May 4, 2020. (AP Photo/Dmitri Lovetsky)

Dr. Alexander Shulepov, an ambulance doctor from the Voronezh region, 500 kilometers (310 miles) south of Moscow, fell out of a window in a hospital early Saturday where he was being treated for COVID-19, breaking several ribs and sustaining a skull fracture.

Shulepov, 37, was admitted to the hospital more than a week before the accident after testing positive for coronavirus. That day, colleague Alexander Kosyakin posted a video on social media of himself and Shulepov complaining about protective equipment shortages. In the video, Shulepov said he was being forced to finish his ambulance shift despite being diagnosed with COVID-19.

Five days later, local health officials shared another video of Shulepov on social media in which he retracted his earlier complaints, saying he was just being emotional.

Five days later, Shulepov fell out of a two-story hospital building. The cause of the accident remains unknown. Some local media suggested he was merely attempting to smoke on a window sill, while others reported that Shulepov was under a lot of pressure for publicly complaining.

Another doctor’s window fall occurred in Siberia on April 25. Dr. Yelena Nepomnyashchaya, acting head of a hospital in Krasnoyarsk, a city in western Siberia, fell out of a window of her office on the fifth floor. Local media reported, citing anonymous sources, that the tragedy took place right after she had a conference call with regional health officials.

Media reports alleged that Nepomnyashchaya was arguing against re-purposing a ward in her hospital for coronavirus patients because of severe shortages of protective equipment and trained medical personnel, but she failed to convinced the officials. Krasnoyarsk health officials denied that the conference call took place. On Friday, Nepomnyashchaya died in intensive care.

Just the day before Nepomnyashchaya’s fall, on April 24, another doctor sustained deadly injuries after falling out of a window in a hospital in Moscow. Dr. Natalya Lebedeva ran an ambulance station in the Star City, Russia’s spaceflight training facility just outside Moscow, which reported several dozen coronavirus cases in late April. She was admitted to a hospital in southeast Moscow with suspected COVID-19.

Levedeva died immediately after the fall, with health officials insisting it was just a tragic accident. Some Russian media, however, claim Levedeva was accused of not protecting her staff from becoming infected and committed suicide because of it.

Russia has reported 166,000 infections and 1,537 virus deaths, but health officials in the West have described those numbers as laughably low.

There is no official data on how many Russian health workers have died working on the front lines of the pandemic and Russia’s Health Ministry did not respond to numerous requests for comment by The Associated Press.

Last week, a group of Russian doctors compiled an online Memory List of doctors, nurses and other medical personnel who died during the outbreak. The list currently has 111 names.